On Sunday, Susan Hogue of Shandon found something on the deck of her Heyward Avenue home that she hadn’t seen in 17 years – a rat. The poor creature was in its last throes of life, having been rudely handled by the Hogue’s three dogs.

“I think he was frightened to death,” Hogue said.

But the real surprise came when Hogue posted a picture of the now-deceased creature on Shandon’s Facebook page. It drew 111 comments from neighbors who noted a marked increase in rat sightings in the upscale neighborhood in recent months.

Similar complaints also came from residents of the nearby Rosewood and Hollywood-Rose Hill neighborhoods. And Hogue’s photo began popping up on Twitter with more concerns.

“I didn’t realize it was a problem for so many people,” Hogue said. “I was surprised to find out that some people have been battling this problem for years.”

Rats, it seems, love Columbia. And increasingly, the Capital City is in the running with waterlogged Charleston as the rat capital of South Carolina, experts interviewed said.

“Rats have always been a problem in Shandon because of the older sewer lines, older water lines and established trees,” said Glenn Matthews, owner of Modern Exterminators, a Columbia pest control company. “And Charleston is a hotbed, too. But now I’m getting more calls about them” in Columbia.

Some residents blame the perceived increase on the city’s decisions to stop hanging poison rat bait in the storm sewer system five years ago. It was a move generally praised because it kept the toxic chemicals from polluting the Congaree annd Broad rivers, where all the city’s storm water flows.

Others say the Five Points beautification and utility replacement project a decade or so ago drove rats from the retail district’s myriad tunnels and sewers into the neighborhoods.

But according a Tom Campbell, a wildlife biologist who owns Natural Roots wildlife relocation service in Columbia, the city is fertile habitat for rats, no matter the circumstances. The habitat includes:

A warm climate: It’s very rare that temperatures get low enough to freeze off a rat’s fuzzy butt.

Lots of water: three rivers, myriad streams and a whole lot of swampland to be exact, which rats find very attractive.

Lots of trees, which benefit rats in two ways: The thick tree canopy helps protect the rodents from hawks and other airborne predators; and the prevalence of oak trees ensures a bounty of acorns year-round, which feeds rats and the city’s abundant squirrels.

And Columbia’s rats are especially fond of trees.

Unlike the insidious Norway rat that stowed away to America from Europe on freighters and passenger liners for decades and are infamous disease carriers, the most prevalent rat here is the Black or Roof Rat.

It is an indigenous species that is arboreal and more benign. In other words, they are excellent climbers and live in trees and other elevated locations, Campbell said. Plus, they are less likely to carry diseases.

“There’s no shame to having (a Roof Rat) around your house, if they are living in a tree or in ivy,” Campbell said. “They are part of the ecosystem; they provide food for predatory birds. You just don’t want them in your house.”

And fall is a time for them to move to warmer places to hunker down.

“Would you rather spend the winter a knot hole in a tree or a warm attic?” Campbell said.

Like squirrels, rats tend to chew through walls to get into your attic or crawl space, then chew through your wiring to use the insulation for nests, increasing the chance of fires. Getting rid of those rats can be an expensive operation, running anywhere from $300 for a mild case to $4,000 for a serious infestation.

But for Hogue, the issue should be controlling the rodents before they get into your house.

Her post to Mayor Steve Benjamin’s Facebook page drew a call to Hogue from Robert Judy, superintendent of waste water management, who said he was not aware of a growing rat problem, Hogue said. Judy was not immediately available for comment Tuesday.

But Hogue said there should be some dialogue and study about the rat population — growing or not.

“I think the neighbors and the city need to get together and talk this over,” she said. “Because we do have a problem.” 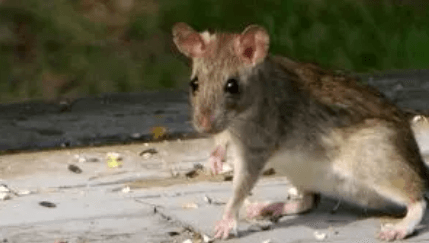